On January 22, when Kerala Express leaves from Thrissur to Delhi, it will have onboard, apart from other commuters, members of the music band Oorali. Comprising musicians, actors and visual artists, the six-member collective will travel to the capital to express support to farmers protesting against the new Farm Laws. “This is one of the most massive democratic protests in the history of independent India and by travelling all the way and being with the farmers, we want to express solidarity with them,” says Saji K, founder and musician in the Kerala-based band.

Known to comment on socio-political issues, the largely folk-reggae band has also reached out for support through social media, requesting others to join them. Returning to Thrissur on January 30, in Delhi, the band will visit farmers in border areas and stay with them. “We haven’t decided if we would perform but we are carrying our instruments. It will be impromptu. We are asking all artists to come with their art material,” says Saji.

The band was established in 2013. (Photo: screengrab/ Oorali website)

He adds, “There are around 2.5 lakh farmers, including elders, women and children, spread out across six locations on the borders of Delhi, peacefully protesting for more than 50 days in the shattering Delhi winter. It is our duty as artists to awaken the attention of the citizens and the international art community to this struggle, thereby pressurising our government to adhere to the needs of its people, rather than to the whimsies of corporates. We request the Indian art community to use art to give strength, highlight and create discussions about this issue.” The response, he says, has been encouraging. While several artists will join the collective in Delhi, more than 15 videographers, painters, musicians and actors will travel with the band on the train from Thrissur. 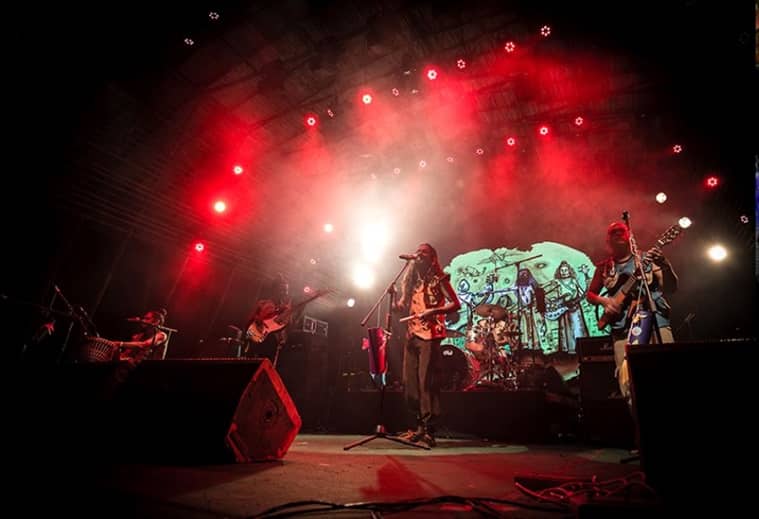 Established in 2013, the band comprises six core members – Saji, Martin John C (actor, director, singer), Shaji Surendranath (actor, dramaturge and lyricist) Arjun (musician percussionist, tattoo artist and Carnatic vocalist), Mallu (actor) and Sudheesh KU (percussionist, painter and vocalist). The collective has performed in several towns and villages across Kerala in a refurbished bus, converted into a performing space, they have named Oorali Express. If during a performance in 2018 in Bengaluru, they stressed on the importance of water bodies, in 2017 the band started a campaign to protest against Vinayakan’s death, a Dalit boy who was allegedly tortured in police custody in Thrissur. In 2019, the band took a trip across Kerala to thank fishermen who had led the rescue operations during the 2018 floods in the state.

“We are not really a genre-based band. Music, for us, is a way of expression. Being political is the fabric of the democracy we live in, it’s not about being affiliated to any political party. We speak the language of art through our music,” says Saji.

Conor McGregor is one of the best at ‘getting under your skin,’ says UFC fighter Dustin Poirier

Analysis: Comedy steps up as a respite from our current woes

Kylie Jenner had a craving for this food...

Judi Dench is determined to continue working despite...